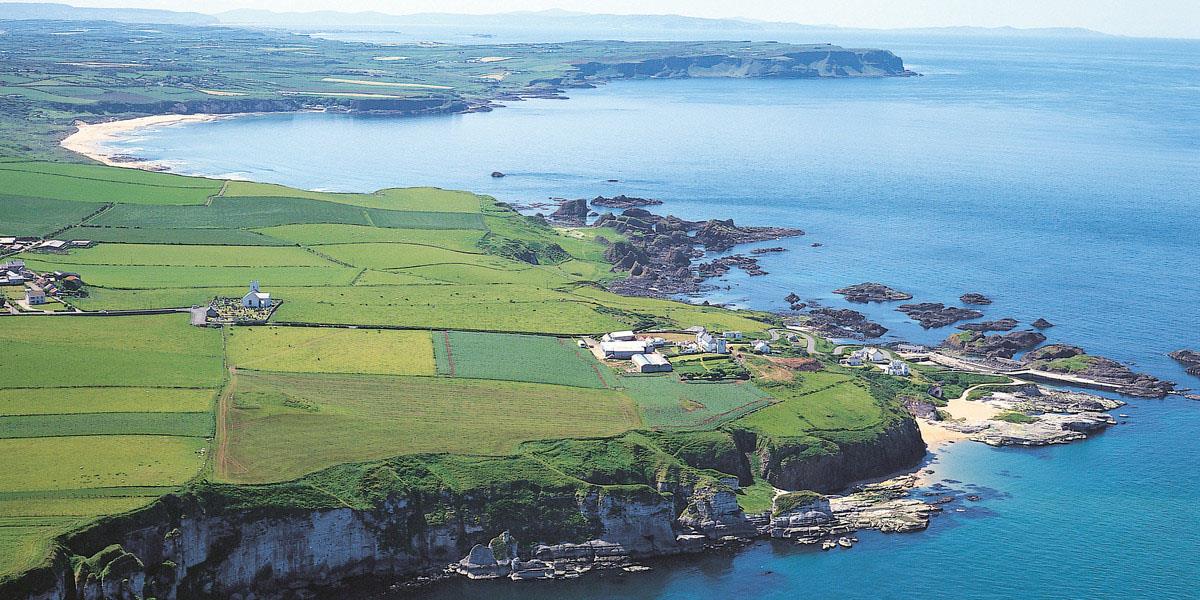 Ballintoy Harbour can be discovered in the picturesque village of Ballintoy. Known as a ‘raised beach’, it is located alongside the B15 coast road, 17 miles north-east of Coleraine and five miles west of Ballycastle. Accessed by a spectacular, steep winding road, it is a painter’s paradise with sea stacks, rocky islands, pools and busy harbour leading to one of Europe’s great cliff-top and wild beach walks. A lcar park and picnic facilities are available beside the harbour café.

The small fishing harbour can be found at the end of a small narrow steep road down Knocksaughey Hill, which passes by the entrance to Larrybane and Carrick-a-Rede Rope Bridge. The village itself, which is just one kilometre from the harbour, has a charming array of small shops, two churches, including the quaint white Ballintoy Parish Church on the hill above the harbour, as well as tourist accommodation, restaurants, commercial and social facilities.
For those looking to capture a true sense of Irish rural life, it is an ideal stop over whilst touring the coastal route.

It has been used as a filming location in HBO’s epic series Game of Thrones. This stunning harbour location has been used for exterior Pyke shots and as the Iron Islands. Go to www.discovernorthernireland.com/gameofthrones to find out about other Game of Thrones Filming Locations in Northern Ireland.

Featured Scene: This picturesque coastal nook is where Theon Greyjoy arrives back in the Iron Islands and where he later admires his ship, the Sea Bitch. This is also where he first meets his sister Yara. Theon returns here in Season 2 Episode 2 and is baptised here in Season 2 Episode 3. Season 6 Episode 5 also features Euron’s drowning and rebirth, and the nearby beach played host to Melisandre’s burning of Stannis Baratheon’s bannerman

In our Luxurious Rooms

In our Porthole Bar & Restaurant

Carrick-a-Rede, from the Scottish Gaelic 'Carraig-a-Rade' meaning "The Rock in the Road" - an obstacle for the migrating salmon as they searched for the river in which they were born.

Enjoy lazy days and long walks on this beautiful stretch of sand. Look out for wildlife on the beach and in the sea. The stunning, sweeping sandy beach of White Park Bay is located in the small village of Ballintoy, County Antrim. The spectacular sandy beach forms a white arc between two headlands on the North Antrim Coast. Its secluded location means that even on a busy day there is plenty of room for quiet relaxation. The beach is also backed by ancient sand dunes which provide a range of rich habitats for bird and animal life.

Just two miles from the spectacular Giant's Causeway, the distillery lies in an area of outstanding natural beauty which is rich in history and folklore.

Dunluce Castle is sited dramatically close to the edge of a headland, along the North Antrim coast. Surrounded by jaw dropping coastal scenery, this medieval castle stands where an early Irish fort was once built and where its history can be traced back to early Christians and Vikings. Visit and take a peek at medieval Irish life!

The Giant's Causeway is a magnificent, mysterious geological formation on the North East coast of Co Antrim steeped in myth and legend.

The Bayview Hotel is perfectly situated for those who love a round of golf. Choose from a huge range of fantastic courses along the beautiful Northern Ireland coastline.

We use cookies on our website to give you the most relevant experience by remembering your preferences and repeat visits. By clicking “Accept All”, you consent to the use of ALL the cookies. However, you may visit "Cookie Settings" to provide a controlled consent.
Cookie SettingsAccept All
Manage consent

This website uses cookies to improve your experience while you navigate through the website. Out of these, the cookies that are categorized as necessary are stored on your browser as they are essential for the working of basic functionalities of the website. We also use third-party cookies that help us analyze and understand how you use this website. These cookies will be stored in your browser only with your consent. You also have the option to opt-out of these cookies. But opting out of some of these cookies may affect your browsing experience.
Necessary Always Enabled
Necessary cookies are absolutely essential for the website to function properly. These cookies ensure basic functionalities and security features of the website, anonymously.
Functional
Functional cookies help to perform certain functionalities like sharing the content of the website on social media platforms, collect feedbacks, and other third-party features.
Performance
Performance cookies are used to understand and analyze the key performance indexes of the website which helps in delivering a better user experience for the visitors.
Analytics
Analytical cookies are used to understand how visitors interact with the website. These cookies help provide information on metrics the number of visitors, bounce rate, traffic source, etc.
Advertisement
Advertisement cookies are used to provide visitors with relevant ads and marketing campaigns. These cookies track visitors across websites and collect information to provide customized ads.
Others
Other uncategorized cookies are those that are being analyzed and have not been classified into a category as yet.
SAVE & ACCEPT